Sausages are not common around these parts. The Turks make sucuk (pronounced ‘sujuk’), which is like a cross between pepperoni and chorizo, though obviously no pork is involved. It comes in two forms – sweet and hot – which refers to the heat level of the paprika which forms its main flavour. It appears with alarming regularity on pizzas and in toasted sandwiches, as well as being the main ingredient for sucuk yumurta, a breakfast dish where beaten eggs are added to sliced sucuk which has been fried in olive oil – you end up with a kind of hot, oily, spicy, sausagy scramble. I’m not a fan of either eggs or sucuk, so that particular combination of ingredients would definitely constitute my Room 101 breakfast. What’s wrong with a bowl of cornflakes?

Since we came to live here, we’ve had to make our own sausages (obviously nobody made us do so, I am just a bit of a sausage lover). We made an astute purchase of a ‘little demon stuffer’ from the Weschenfelder sausage-making suppliers in Middlesbrough. It’s basically a giant metal piping tube, with a huge screw, which forces the meat out through a plastic nozzle, which has already cunningly been threaded with sausage casings.

It’s a hand-driven affair and involves Robin turning a handle while I shout ‘stop’ each time the next sausage has reached the desired length. I get the giggles every time, because it always goes wrong and Robin’s turning action reminds me of the clown who turns the handle for the closing credits at the end of every episode of Camberwick Green. (If you are not a 1960s baby and have failed to take in the Trumptonshire trilogy, then I urge you to hasten to youtube without delay).

I also had a frugal moment while I was buying the ‘demon stuffer’ and decided not to make the extra investment in the non-slip feet which you can use to attach the machine to the worktop. So, obviously the whole flipping thing is sliding around while we’re trying to stop and start the never-ending outpouring of pink pap, so it’s quite a challenge. For that reason, we always make a HUGE batch to put in the freezer. Oh, and it has about 347 parts to wash up, so that would be another reason. We need to get a bigger freezer, then I’d only have to do it once a year.

On Sunday, we went into Migros – our answer to Sainsbury’s – and secured a special prize: a fennel bulb. They are almost as rare as pork sausages around here, though we did once spot some in a kitchen garden next to where we park our car when we go walking at Patara. I asked the owner about them, and he told me he grows them as a deterrent to keep some kind of pest away from something else he grows – so he doesn’t even eat them. I wanted to cry at that moment (and, no, I won’t deny that I thought about going back after dark to rescue them).

Back to Migros. I was on that lone fennel bulb like Paul Hollywood on a soggy bottom. I would have pushed women, children and other less able people out of the way to get to it, though luckily no-one stood between it and me, so no living creature was harmed in the interests of sausage and fennel bake, and my reputation as a normal law-abiding citizen is more or less intact.

This is a fab dish, as everything is cooked on a single tray, lined with foil or baking paper, so not much washing up and all you need on the side is a green salad and about a hundredweight of fresh crusty bread to soak up all the delicious liquoricey tomatoey juices. If you are not a fan of fennel (and lots of people aren’t), of course you can leave it out – you could add some courgettes instead, or if you live in a country where you can get parsnips, those would be really nice too.

Talking of which, Robin has several pots of parsnips on the go – I am not sure about the chances of this particular pot: 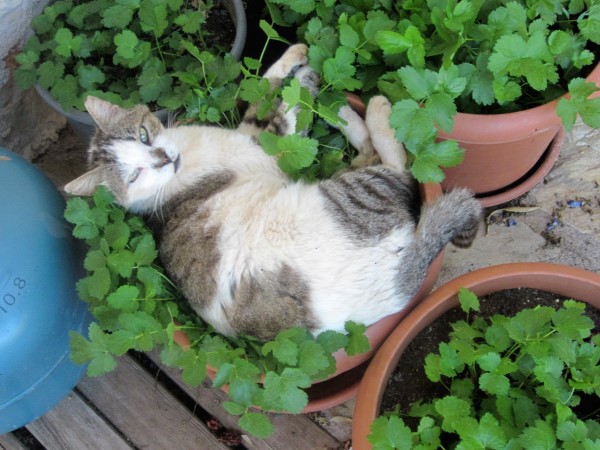 Mr Patch is a cat who lives in our garden – he used to be a real ‘Tom-Cat-About-Town’ and he decided to come to live with us after we caught him and took him to the vet to be neutered some years ago. He is now very old, utterly stone deaf and partially blind, so he gets away with things like sitting in the parsnips, because we feel mean chasing him off. He’s just incubating them. Don’t be fooled by his aggressive expression, that’s just his version of a smile for the camera – in fact, I think he is just wondering why Robin couldn’t grow the parsnips in slightly larger pots that would be a better fit for his bottom…

4 – 6 sausages of your choice
2 small/medium potatoes, washed
Half of a bulb of fennel, stalks removed (save them for stock) and green fronds reserved
1 red onion, peeled
12 small tomatoes (not cherry – they would be too small)
A good scattering of chilli flakes or a fresh red chilli, chopped
3 cloves garlic, peeled and chopped
Salt & freshly ground black pepper
Olive oil
Balsamic vinegar for drizzling

Line a shallow roasting tin, just large enough to take all the veg in one layer, with baking paper or a double piece of foil.

Cut the potatoes into chunks, just cover with water in a pan and bring to the boil. Turn down the heat and simmer for five minutes while you prepare the rest of the veg.

Bake in the pre-heated oven for 45 minutes to an hour, until everything is golden brown and the sausages are cooked through.

Serve with a green salad, plenty of crusty bread and balsamic vinegar for sprinkling. 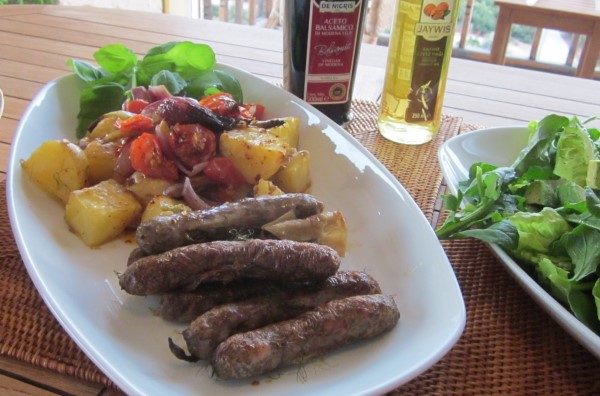 6 thoughts on “Sausage and fennel traybake”