We’ve been on holiday AGAIN! Will we never rest, for goodness sake. We had planned a few days in Rhodes, but the Greek port authority has decided, in its wisdom, that our ferry from Kaş should no longer be allowed into the harbour at Kastellorizo until the Rhodes ferry has departed. This has rather scuppered everyone’s trip plans and means an overnight in Kastellorizo before catching the Rhodes ferry the next morning. No problem with that except that we only had a few days and it would have cut our time in Rhodes rather too much.

So, in a lazy way,  we abandoned Rhodes and decided to just have a few days on Kastellorizo – known as Meis around these parts, or sometimes Megisti, depending on whether you are Italian, Ottoman or Greek, all of whom have ruled the island at some point in its history (along with the Brits, of course, during WWII, who were then dislodged by the Germans). You really couldn’t make it up.

This was one of the best holiday decisions we have ever made – we had an idyllic few days and the journey only required a ten-minute trip into town on our local ‘dolmuş’, which stops right outside our front door, followed by a quick coffee in town and then 20 minutes on the ferry. My idea of a sensible journey – no horrid airports or planes involved. We’ve been to the island before many times, of course, but we’ve never stayed on in the evening after the daytrippers have left.

We stayed in the Hotel Megisti, which has surely the best spot on the island, facing the harbour – this was the view from our room:

Considering that we could still see our village from our hotel balcony, it is amazing how different the atmosphere was on Kastellorizo. Things around here have been a little tense, to say the least, in the last few months, so it was lovely to be somewhere where we could feel truly relaxed. Not to mention the fact that I was never more than a few metres away from a crisp rasher of bacon or a decent cup of coffee. Smashing – not sure why we don’t take the plunge and live there instead of here.

The island really is straight out of central casting – colourful buildings, colourful boats, fishermen cleaning their nets and a couple of summer-resident granddaddy-sized loggerhead turtles popping their heads up to listen to the conversations in the coffee houses on the harbour wall.

Anyway, needless to say, we did much slouching under a brolly with a book, coupled with rather too much eating. If I ate any more octopus, I would probably have sprouted tentacles.

Now then, back to kitchen duties. Before we left, I baked scones to use up some cherries which had gone rather soft (any excuse).

Lots of my friends tell me they can’t bake scones, which has me baffled, because they are so easy and so quick – they can be on a plate, smothered with jam and cream, less than half an hour after you’ve decided to make them. One of my friends (you know who you are Mrs M) puts EGG in her scones to make sure she gets a decent rise. I am sure they are delicious, but what you have there is a rock cake – absolutely nothing wrong with that, except it’s not a scone.

There are a few simple rules – handle the dough as little as possible – don’t start bashing it about with a rolling pin, make sure you don’t pat the dough out too thinly, and ensure the oven is at the right temperature before you put them in. If you like your scones to head straight for the heavens instead of toppling over, use a high-sided tin and don’t give them too much space, then the steam does the work. What could be easier than that?

I’ve used cherries and blueberries, because I had fruit I wanted to use up, but you could use glacé cherries or sultanas (or both). Alternatively, you could add the zest and juice of a lemon and serve with lemon curd – very yummy indeed, and the acid from the lemon juice will give the baking soda an extra boost. I use ordinary milk in my scones, but it can be replaced with rice, soy or almond milk, or you could use half yoghurt and half milk (again the acid from the yoghurt will help the rise). I wouldn’t normally put sugar on top of scones, but somehow it seemed right with the berry fruits.

On this occasion, I’ve made my scones triangular so that I didn’t have to bother with a cutter – it also means you don’t waste any of the dough (though I always cobble together a mini scone with the leftover bit of dough from cutting – guess who gets that when they come out of the oven? *smirks smugly*)

225g self-raising flour
1 teaspoon baking powder
¼ teaspoon baking soda
pinch of salt
40g butter or margarine, cut into small cubes
A handful of cherries, stoned and halved
A handful of blueberries – fresh or frozen are fine (don’t thaw if frozen)
150ml milk, or non-dairy milk replacement with a squirt of lemon juice or a teaspoon of vinegar (or half and half milk and yoghurt)
A little milk to brush the tops plus sugar for sprinkling (optional)

Line a roasting tin or large round cake tin with non-stick baking paper (or just grease the tin generously).

Sieve the flour, baking powder, soda and salt into a bowl or small processor and add the butter or margarine. Very gently rub the butter or margarine into the flour mixture. (I use a little food processor for this, which handily turns into a bowl when you take the blade out, but it only takes a minute or so by hand.) The mix should have the texture of fine breadcrumbs. 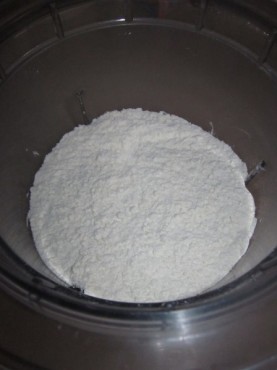 Gently stir in the fruit, trying not to squash it too much. Make a well in the centre of the mixture and pour in the milk (or milk/yoghurt mixture). Stir with a table knife until the dough just clumps together.

Tip on to the work top, scraping out any dry bits that haven’t mixed in. Very gently and very briefly pat the dough together and shape with your hands into a ball. 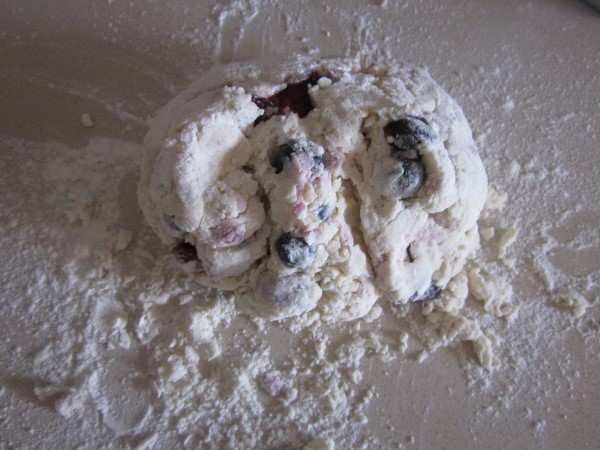 Pat it down into a circle using your hands, then cut into triangles with a sharp knife (use a floured round cutter if you prefer – in which case, push straight down, no twisting or turning, or your scones will keel over when they rise).

Place the scones a little distance apart in the prepared tin. Brush the tops very gently with a little milk, then sprinkle with sugar if you wish. 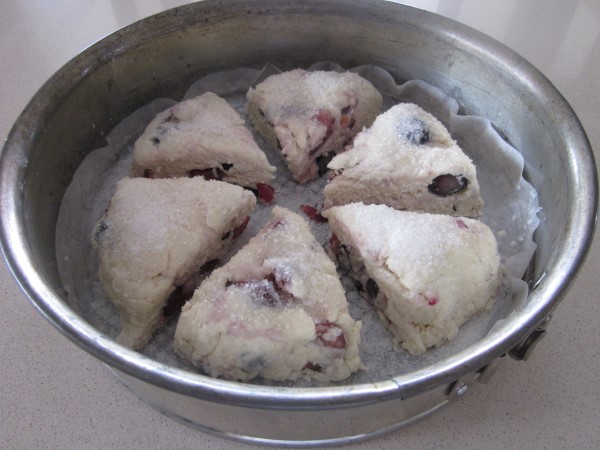 Bake for 10 – 15 minutes until well risen and golden brown. If you are baking the big triangles, they may take a little longer – mine took almost 20, but keep checking after 10 minutes.

Serve with butter, and jam if you wish. Or if your name begins with John or Linda, spread with butter, pile on a whole load of strawberry jam, then squirt with whipped cream.