Happy new year to everyone. Rather late in the day, being half way through January, but the year already seems to be racing past at speed.

We are back in Cornwall after spending Christmas and the New Year looking after the most beautiful black labrador in the Cotswolds village of Bretforton, while her owners went off on holidays for a couple of weeks.

Thrown in with the deal was a velvety black rabbit called Bumbles – a comical, cantankerous, unpredictable, dish-hurling, naughty, affectionate little diva. After two weeks, we came to an understanding – she could nibble my jumper sleeves as long as she didn’t nibble my wrists, and I would provide her with an endless supply of brussels sprout tops, kale, cabbage and the occasional stick of celery.  That seemed to work. To be fair, the dish-hurling only happened twice – unfortunately this then involved me crawling into the pen on my hands and knees, Christmas-enhanced backside in the air, trying not to kneel on rabbit poo, in order to retrieve it. We’ve had more dignified assignments. Oddly enough, Robin left rabbit care to me, though I admit he more than made up for this by taking on responsibility for the early-morning dog walks.

Pom the dog, on the other hand, was a model labrador – sweet, calm, affectionate, loving, and eager for walks at any time of the night or day. And the occasional swim in the brook if we weren’t paying attention at the salient moment. We miss her and can’t wait to go back and look after her again. 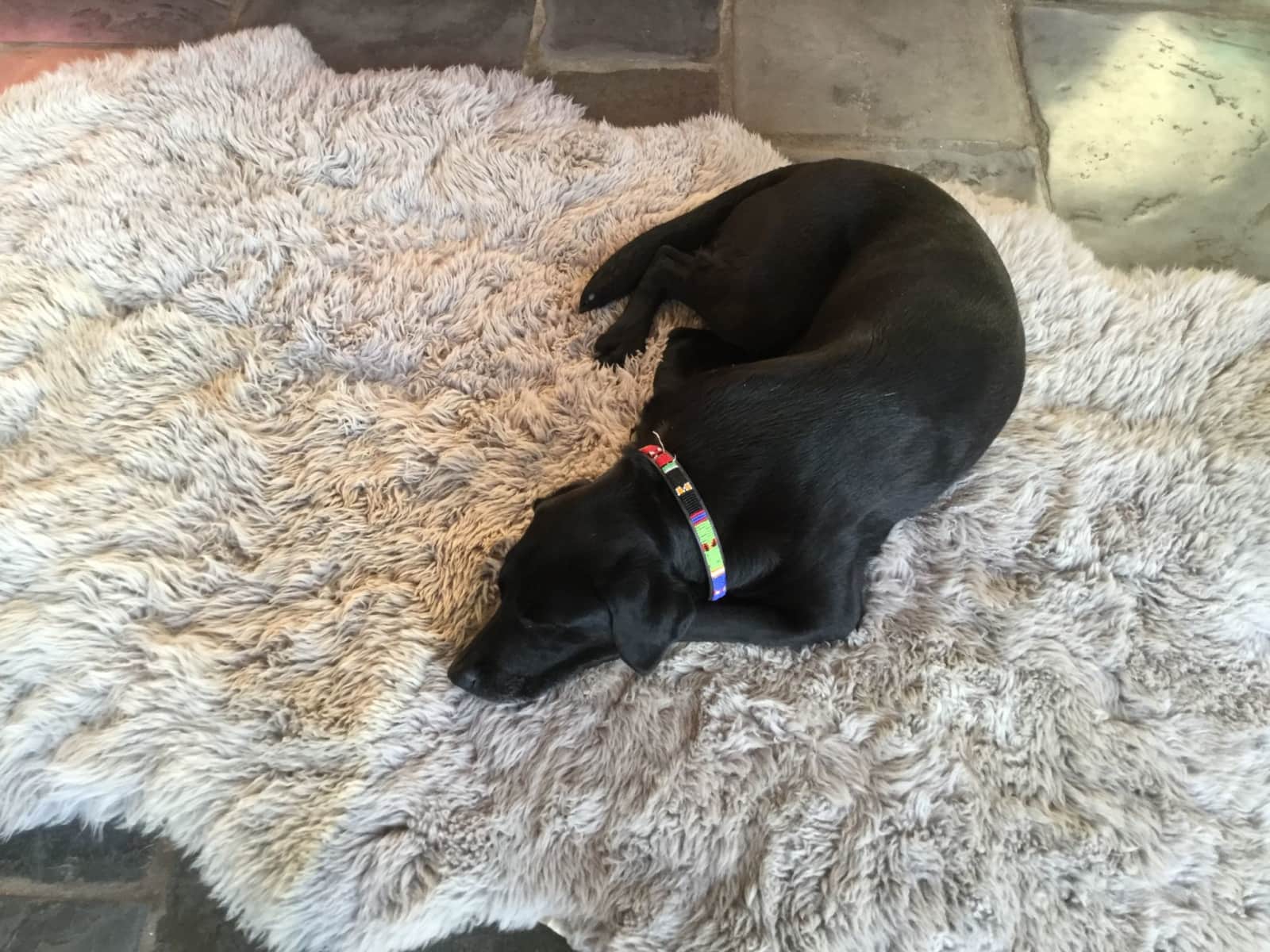 The village of Bretforton is a straight-out-of-a-picture-postcard English Cotswolds village, complete with pretty church (amazing windows), obligatory village square and 15th Century National Trust pub – The Fleece Inn. Handily this was next door to ‘our’ house – sadly, we couldn’t get the key to work in the lock on our front door, so we had to use the back door and take the long route there (at least three minutes – pah).

The granddaughters came over a couple of times and had a wonderful time playing in the garden hot tub, not to mention the outdoor rainfall shower (hot water) – I have never seen children so keen to get clean. I was almost tempted myself, but it was January, after all. Ne’er cast a clout and all that…

I had an interesting time operating the Aga. Lots of operator error. I tried to make my Seville orange drizzle cake, only with Christmas clementines, but a combination of ‘slightly-too-large loaf tin meets much-too-hot oven’ resulted in what can only be described as a clementine-flavoured brick. More of a pavement slab, in fact. Obviously I didn’t go near it, as oranges and I don’t have the closest of relationships, but the rest of the family declared it to be perfectly edible and they ate the lot. I had to put absolutely loads of drizzle on the top to offset the lack of rise and lack of crumb, which was probably why everyone liked it so much. I don’t think I will try and replicate it in a conventional oven.

Anyway, this week we’ve been told by our government that we are not eating enough fibre. How do they know? Have they been spying on my mince pie habits? I’ve since been trying to work out if this is true in our house. I must say, even though we practically eat our own bodyweight in fruit and veg every day, and we’re certainly fond of a bean AND a lentil, some days it would be borderline to hit the required 30g (it used to be 20g but it apparently grew overnight). I do absolutely stuff our lunchtime (wholemeal of course) bread rolls with loads of salad vegetables and we have fresh fruit for breakfast every day (as well as homemade granola for him indoors). Even so, we will have to concentrate hard to hit this new target.

So, last weekend’s offering was high-fibre chilli. I used half as much minced beef as I usually do, and replaced the other half with a can of lentils. Obviously you could use dried lentils, but I didn’t have any. I’m not mad on kidney beans, so I used a can of cannellini beans plus a couple of handfuls of soya (edamame) beans.

These really are a secret weapon in the fibre department – I buy them from Tesco usually, but you’ll find them next to the frozen peas in most supermarkets. They’re great as they are just like using frozen peas – they take five minutes to cook and are useful to have in the freezer in case you’re a bit short on veggies one evening. Or if Theresa May’s health spies think you need more fibre on your plate.

The other good news is that by replacing some of the meat with lentils you will not only save money but you’ll reduce the amount of fat in your chilli. The fibre content has been further boosted by adding minced-up onions, carrot and celery – none of which will be visible to the naked eye once the chilli is cooked, making it useful if you have veg-resistant children in your household. I whizzed mine in the mini-processor that came with my stick blender, which worked a treat.

And, most importantly, it is absolutely delicious – fresh chilli, smoked paprika, cinnamon, a little dark chocolate and a hint of cumin give it a really lovely rounded flavour. We had it with jacket potatoes cooked in the wood burner (more fibre) and a pile of green veg (yep, more fibre). All in all, we ended up with about 20g of fibre per serving, which is getting us close to our daily requirement. Hurrah.

By the way, if you are interested in checking out the nutrition value of anything you are cooking, this really easy calculator will work it out for you.

I usually put beer in my chilli, as it adds a little sweetness, but completely forgot to buy any – if that idea rocks your chilli boat, use it to replace the stock/water and then top up with a little water if you need more liquid. There was one bottle of Old Speckled Hen in the fridge, but I’d a feeling I might be out of favour with you-know-who if I snaffled it for the chilli. The chocolate is there in the recipe to add a little depth – it’s not essential, but does make a difference. A teaspoon of cocoa would do the job perfectly if you don’t happen to have dark chocolate lying about – I used about a tablespoon of dark chocolate chips, but any dark chocolate will do.

Heat a little olive oil in a large sauté pan and add the minced beef. Cook, stirring frequently, over a medium to high heat until it is well browned. Add the onion, carrot, celery, fresh chillies and garlic, together with a generous pinch of salt. Cover with a lid and cook over a low to medium heat until the vegetables have started to soften.

Stir in the oregano and spices, then add the tomato paste. Once this is well combined, add the passata and water/beer, then stir in the lentils and both the canned and frozen beans.

Bring to the boil, then stir in the bay leaves and chocolate.

Turn the heat down, cover with a lid and cook very gently for one to two hours (the longer the better). If you wanted to go out and leave this cooking, you could also cook it in a 140°C oven – in this case, if the lid of your pan has an air hole, bung this with a little piece of foil, rolled up so that it can be inserted into the hole.

Stir in most of the chopped parsley, leaving a little for the top.

Serve the chilli with rice or jacket potatoes, topped with grated cheese and the rest of the parsley or coriander. Serve plenty of salad or green veggies alongside. Leftover chilli can be frozen for another day and used to make empanadas (recipe coming soon) or enchiladas.