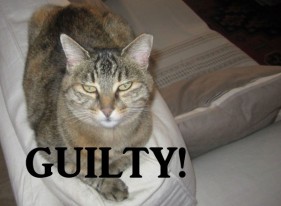 We had an incident this week involving: a) a piece of fillet steak, and b) a member of our household. Obviously it wouldn’t be correct to ‘grass up’ the perpetrator, but let’s just say there is a large clue in the photo on the left.

We rarely eat red meat, but the very windy weather this week (more on that later) has blown down the pink peppercorns from the trees in the marina – we picked some up while out on our daily walk, and decided to ring the changes with pepper steak for dinner.

We duly dispatched ourselves to Migros, where we bought a rather nice piece of what the Turks call ‘bonfile’, better known as beef fillet to we Brits – it is one of the very few cuts of meat that are still identifiable after a Turkish butcher has set about them.

Foolishly, when we arrived home, I left the shopping in the hallway, distracted by some other random task, only to find on investigating some suspicious rustling that there was a large tabby bottom sticking out of the shopping bag. Eeek. My first thought was the bread (she loves bread), then I remembered the steak. She had infiltrated the packaging and the edge of the fillet had some very definite gnaw marks, but it was largely intact. A good wash and a judicious trim later, and we decided it was safe to eat (and, for the record, was delicious).

Fast forward several hours, actually make that 3am the next morning. I awoke to more suspicious noises in the hallway, and some panicked cat-shouting. The noise was very strange – kind of a clopping sound and quite a bit more rustling. I discovered Toast running up and down the stairs, inextricably attached to the Sainsbury’s shopper in which she’d earlier found the steak – she had one of the bag handles wrapped around her front leg and the other around her tummy. She looked as though someone had hitched it to her like a pony and trap. I can’t say I wasn’t tempted to leave the little madam in her predicament, the sight of which was extremely funny, even at 3am, but couldn’t stand the noise and unhitched her. She spent the rest of the night outside and I think she might be heading that way again for the rest of the week.

We’ve had quite an eventful week. On Monday evening, a sea tornado made landfall in our town. We see them frequently during the winter, but they usually veer off when they get within a few hundred metres of the shore. This one didn’t. It destroyed an entire bay of luxury villas, then hopped over the top of the Kas Peninsula and across the lagoon to our village.

Already full of golfball-sized ice, it collected trees, roof tiles, roofing timbers, doors, windows and masonry, flipping over cars and other objects on its route (one car was found upside down in a tree). It then raced up our hillside in a straight line, removing roofs and trees as it passed. Nobody has any idea where this has all gone, as it has mostly disappeared without trace, though one of our friends, oblivious to what had happened, was mystified to find her garden looking like a well-stocked builder’s yard when she went out the next morning.

Thankfully, we were a couple of hundred metres to the west of the tornado’s path and our house sustained no damage, though we began to think at one stage that the ice would smash through the kitchen windows (where we don’t have shutters because the roof extends out two metres over them – but the ice was simply coming at us horizontally, beneath the roof). Dozens of people were injured, hundreds of crop greenhouses smashed and quite a lot of people left homeless, so we feel very fortunate indeed not to have been affected.

The next day, an entire line of roofers could be seen replacing roofs in our village – by nightfall, almost every house was watertight again, but the devastation across the lagoon on the Peninsula will take months or years to repair, with many houses requiring major work and some complete demolition. It is a sobering reminder that, even here on the Mediterranean, the weather is completely unpredictable and can be very powerful.

Confined to barracks during the wild weather, I decided to combine the inevitable fallen Seville oranges with the fallen limes and try a different, very easy method of making marmalade. It requires no faffing about with muslin bags or piles of pith and pips, and no tedious zesting and chopping. The fruit is cooked whole, then pips removed (they all come out together with one stroke of a fork) and the soft flesh roughly chopped, before the whole lot is returned to the pan for a final simmer. Although the fruit takes a while to cook, you can get on with something else while that is happening and actual hands-on time is extremely minimal. There is no requirement for hard boiling or jam thermometers, massively reducing the opportunity for burning the marmalade or boiling it all over your stove. Really, this is the way forward – the recipe is based on one for bitter oranges in a very old Marguerite Patten book that I have on my shelf. Do give this a go – if you like marmalade, you will definitely thank me.

If you cannot get Seville oranges – they should be in the shops from now until January – use a combination of sweet oranges and lemons instead, but do add a couple of limes, as this makes the flavour extra special. I’ve also made this with bergamot, but haven’t got my hands on any bergamots this year, and our own tree is still  refusing to fruit (that’s the level of gratitude you get when you’ve lovingly transported a grafted tree all the way back from the other side of the country, taking up an entire seat in the car).

You can easily double the quantity – the marmalade will keep for at least a year in a cool place – just make sure the fruit/sugar mixture doesn’t come up much more than half way up the pan.

You will need clean, sterilised jam jars and a small plate or saucer

Place a small plate or saucer in the freezer (if you don’t have a freezer, the fridge will do).

Wash the fruit, remove any stalks (if they are tough, you can do this after the fruit is cooked). Put the fruit into a large saucepan with the water, cover with a lid and bring to the boil.

Turn down the heat so that the water is simmering gently, and prop the lid so that it is ajar a centimetre or so – this will enable the water to evaporate just a little, which is what you want.

Cook the fruit (check from time to time that the lid hasn’t slipped) until it is soft and can easily be pierced with the tip of a kitchen knife – this should take about 1 to 1.5 hours. You can see that mine was very soft and caved in when I picked it up with the tongs.

Using tongs, remove the fruit from the pan (keep the water in the pan) and transfer to a chopping board. Halve each fruit and remove any pips with a fork – they should easily come out all together – don’t worry if there is a tiny bit of flesh attached, it’s not important.

Chop the fruit with a sharp knife – no need to worry about shape, just leave it as chunky as you like it in your marmalade, then return it to the pan.

Add the sugar to the pan and then heat gently until the sugar has completely dissolved – if you heat it too quickly, the sugar will crystallise and you will have horrid crunchy bits. Once you can see that the liquid is completely clear, raise the heat to medium until the marmalade is simmering – you want it to be bubbling very visibly but not splashing or in the least threatening to boil up the side of the pan. Don’t worry if a little scum appears on the surface, this will disappear once the fruit stops bubbling.

Simmer for around 15 minutes, then place a teaspoon of the marmalade onto your cold plate. Leave for a couple of minutes to cool, then push the marmalade gently with your finger – if you can see the surface is wrinkling slightly, then your marmalade has reached setting point and is ready. If it is still too runny, give it another five minutes and test again. Repeat if necessary.

Once the marmalade has reached setting point, remove it from the heat and let it stand for five minutes before pouring into hot, sterilised, glass jars.If you make jam and marmalade regularly, it is worth investing in a jam funnel – they only cost a couple of pounds and make this job a great deal safer. You can find them in Lakeland, John Lewis, Robert Dyas and other good kitchen shops.

You can sterilise the jars by running them through the dishwasher and using them while they are still very hot, or wash them in hot soapy water, then place on a tray in a 75°C oven for ten minutes. If the jars are not already hot, they may shatter on contact with the hot marmalade – dangerous and messy! Cover with waxed paper jam covers if you wish (I don’t bother these days, as most lids are plastic-lined anyway) and screw the lids on tightly.