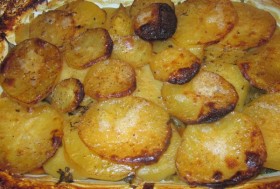 Happy new year to everyone – it is so hard to believe that we are already half way through the first week of 2018, yet it seems like only last week that we left Turkey and returned to the mayhem that is our house in Cornwall.

We’ve had a couple of weeks off from our lovely builders, who will be here with their boots shined (and coffee mugs at the ready) towards the end of next week, ready to start on Phase 2. This involves knocking down a wall (eek) and installing a new RSJ (not necessarily in that order, I realise, no need to write in to let me know that my house is about to fall down). I shall be glad to avoid the accompanying mess by being away in the Midlands, visiting friends and family, and cat-sitting for the same trio of Greek cats that we looked after back in the summer. In return for providing Claridges-style five-star catering and door-opening services for the Grecian trio of whiskered musketeers, we get to stay in Rosie’s lovely home in a pretty village on the Warwicks/Northants border, which handily means we are minutes away from our family and friends.

But that’s getting ahead of ourselves. We have enjoyed our first Christmas in our new home, and have spent the last few days taking advantage of the momentarily drier weather, by getting out and about on some of Cornwall’s fantastic public footpaths. We had no idea that less than a kilometre away from here there is a network of paths, ponds and marshes, recovered from the land where tin mines and arsenic refineries previously stood. They are home to the most amazing variety of wildlife, and the walking tracks go all the way to Portreath, 20km or so away from here on Cornwall’s north coast. We haven’t ventured quite that far yet – that will be a treat for the spring when the weather is a little more reliable.

Afternoons are spent mainly by the fire – we have a new wood-burning stove, called Pete the Penguin, which has a little oven in the top. So far, I’ve only experimented with cooking sausages, spuds and sweetcorn, and heating up bread – nothing so far has ended in tears, though I’ve had a couple of burned tins to deal with, and my oven gloves actually had to be binned after one particular Pete experience. No doubt there will be more on that as we go through January…

Today, we are having a cross between on old-fashioned beef and ale stew and a Lancashire hotpot (boringly cooked in the conventional oven in the kitchen). I was reading an article recently which reiterated that it isn’t always necessary to brown the meat when you make a stew or braise. In fact, I am a big fan of Nigel Haworth’s Lancashire hotpot, which I have made loads of times, and which requires no browning (or general splashing and mucking up of either frying pan, kitchen walls or my general person), so I’m not sure why it’s taken me so long to get here. It also means you don’t have to add any additional fat to the dish, which is good news for anyone cutting back after too many Christmas treats.

Unlike a traditional hotpot, I’ve used beef instead of lamb, and I have also included a whole variety of vegetables instead of just the usual onions (and sometimes carrots, depending upon which bit of Lancashire you hail from). This has many advantages, three of which are increased flavour and nutrition, and the fact that it makes the meat go a lot further. I have only used 350g beef and the hotpot will provide four good-sized portions. All it needs on the side are a few greens. The hotpot is topped with a double layer of sliced potatoes – the bottom layer slightly chunkier, which will hoover up some of the gravy and go very scrummy and squidgy, then a layer of slightly thinner slices, which will be brushed with butter half an hour before lift-off and returned to a slightly hotter oven to turn into a brown and crispy carapace.

The thing I love about this kind of dish is that it spends several hours in the oven while you get on with doing something else (like writing this instead of addressing the pile of ironing that is residing out of sight in the guest bedroom, or finally getting our good china and glassware out of boxes and into the sideboard that we had delivered last week). It kind of separates the cooking process from the eating process, which I like. I’m not a fan of a lot of last-minute frying and basting, as you end up feeling like a frazzled chip and not really wanting to eat your dinner.

I’ve used a combination of chicken stock and beer for this, but you could use either or both, or certainly just water if you don’t have either of the above – that is definitely what my grandma would have done (though she was from Yorkshire, so I am not sure that her vote would have had any clout here). The meat, vegetables and herbs will make a delicious gravy even without too much help. I’ve kept the herbs traditional – just a little bit of parsley and thyme, with a couple of bay leaves tucked under the potatoes. I don’t think this is the time to be adding the likes of rosemary, garlic or oregano – just not British enough. If you don’t want to include meat, this would make a hearty vegan dish, in which case I would add a couple of handfuls of mushrooms, which would give a savoury note to proceedings – a tin of butter beans would probably be pretty good too.

As I write this, I can hear that the rain outside is absolutely hoofing down again. Time to throw another log on the fire.

350g beef (any stewing or braising cut is fine), diced into small pieces
1 medium onion, diced
1 stick of celery, finely diced
½ of a medium leek, halved lengthwise, then thinly sliced
1 medium carrot, peeled and diced
1 small parsnip, peeled and diced
A piece of swede (approx 150g), peeled and diced
The leaves from a few sprigs of thyme (or half a teaspoon of dried thyme)
1 tablespoon chopped parsley (stalks are fine here)
2 bay leaves
2 tablespoons plain flour
500g potatoes, peeled
250ml beer or lager
250ml stock (a cube is fine) or water (you may not need all of it)
Salt and freshly-ground black pepper
A teaspoon of melted butter for brushing

Put all of the vegetables (except the potatoes) and herbs into a large mixing bowl. Season generously with a teaspoon each of salt and pepper (if you are using a mill, at least 20 grinds of the pepper mill). Add the meat and the flour and mix well, so that everything has a light coating of flour. 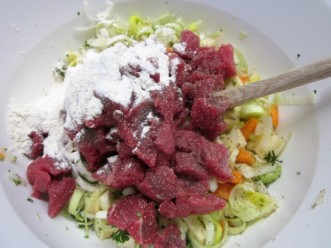 Tip the meat and vegetables into your oven-proof dish and tuck in a couple of bay leaves.

Slice half the potatoes as thinly as you can, and the other half into slightly chunkier slices about 0.5cm thick (no need to be too scientific about this).

Carefully pour the beer down the side of the dish, trying not to dislodge the potatoes too much (easiest done from a small jug), then add stock (or water) until the liquid just comes up to the level of the first layer of potatoes. 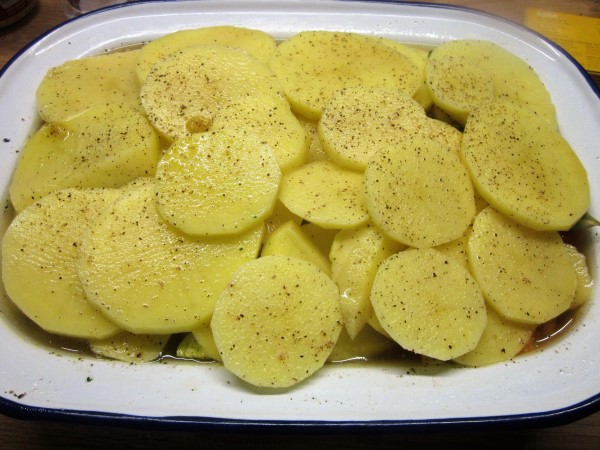 Cover with a tightly-fitting lid or thick foil – if using foil, make sure there are no holes and that the dish is tightly wrapped. I strongly recommend you stand the dish on another tray, which is covered with a layer of foil – mine did boil over a little in the oven.

Cook in the oven for 2.5 – 3 hours. Uncover, brush the top layer of potatoes with butter, and return to the oven, raising the temperature to 180ºC, for another 30 – 45 minutes until the potato topping is brown and crispy.  Serve with green vegetables on the side (and consider calling for professional help to deal with the tin…) 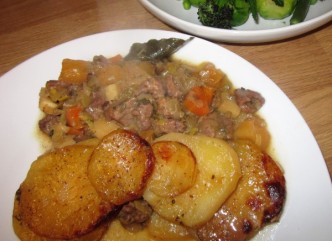