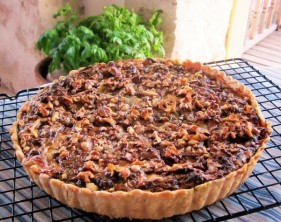 When I have a weird collection of vegetables in the fridge that need using up, my thoughts immediately switch to one of three things: soup, curry, tart. I bought a big bunch of spinach at the weekend, not really knowing what I was going to do with it, and there it was, still glaring at me when I opened the fridge to get the milk this morning.

There were also a couple of tired leeks and half of a wedge of goat’s cheese, which I must confess is long past its sell-by date (things like goat’s cheese shouldn’t have a sell-by date in my opinion – it just gets tastier. If it really has gone over, it will be sporting some kind of colourful mould that will give you a tip-off that it’s going to try to kill you if you eat it).

I’m also cooking some things that will yield leftovers and be easily transportable, as our friend Linda fell backwards while doing some gardening a couple of days ago. Unfortunately she landed on an upturned hoe, so she is now sporting a broken rib and  variously inflamed inner workings. Several X-rays, CT scans and ultrasounds later, she has been released from the clutches of the Turkish equivalent of the NHS (very good it is too) and is back home, but not entirely mobile and probably in need of the odd food parcel or two.

Handily, I had several balls of leftover pastry in the freezer, so a couple of those have been thawed out while we took Linda’s dog for a long walk today, and the rolled-out pastry case is now having a little lie down in the freezer ready for its trip to the oven in a while.

You won’t be surprised to know that I am rather fussy about savoury tarts (I am pretty fussy about everything really). I can’t bring myself to use the term ‘quiche’ – I always feel that name should only be saved for Quiche Lorraine. It also makes me think of those horrid congealed supermarket sludgy things that pass for quiche in the UK. Just grim.

I think savoury tarts are really best served cold, though not necessarily chilled. I actually do prefer mine chilled but, due to contrary popular opinion around here, I usually serve the initial offering at room temperature and then secretly look forward to the very cold slice that’s waiting for me in the fridge the next day.

If you are a tart lover, check out Tamasin Day-Lewis’s The Art of the Tart. I was given it as a gift very many years ago by my friend Jackie, who – possibly unusually for a New York chick – loves cooking. It is still one of the books I use most often. 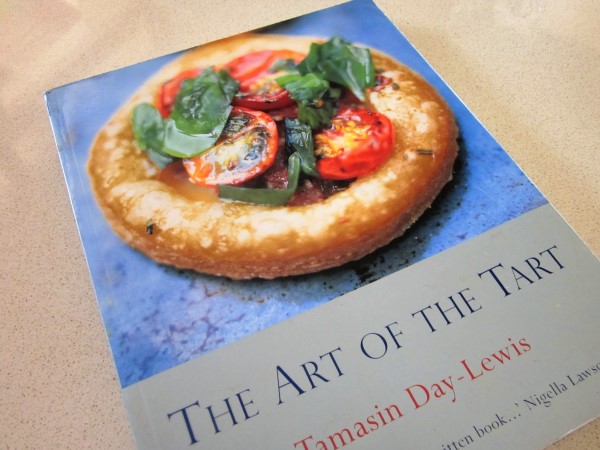 Today’s tart is not from there, it really is just a mish-mash of leftovers, coupled with my oft-used extra short pastry recipe from The French Kitchen (Joanne Harris). As long as the pastry is rolled out thinly and you stand the tart tin on top of a pre-heated baking sheet or roasting tin, it does not need blind baking – no need to give it an opportunity to shrink before you’ve even got the filling in. Of course, if you live in a country where you can buy ready-made shortcrust pastry, by all means take a short cut, but do still chill the case well before filling and baking.

The foothills of the mountains in the area of Turkey in which we are lucky enough to live, form the walnut capital of the country, so we are never short of a large bag of them to add to anything we are cooking – and they are a gorgeous bitter-sweet foil for strong cheese, so they’ll be a be perfect addition here.

You will need a loose-bottomed tart tin, approx 25cm in diameter, greased

Put the flour and cubed cold butter into a food processor and process for about 30 seconds until the mix resembles breadcrumbs. Crack the egg into the mix, fill one half of the eggshell with cold water and add to the mix (obviously just the water, not the shell). Process again, using the ‘pulse’ action, until the pastry forms into a ball – it will take another 30 seconds or so. Tip the pastry out, flatten into a disc, wrap in cling film and refrigerate for at least two hours (overnight is good).

(If you don’t have a food processor, cut the butter into tiny cubes and then rub gently into the flour with your fingertips until you have the required breadcrumb texture. Beat the egg with the water, tip into the mix and stir firmly with a table knife until the dough comes together – you will probably have to finish this process with your hand. Don’t be tempted to add more water or your dough will shrink when it is cooked.)

Once the dough has been rested in the fridge, cut the dough into two and roll out one half until it is large enough to fit your tart tin. Make sure your tin is well greased, then line the tin with the dough, pressing it into the corners and trimming the dough once it is in the tin. Any off-cuts can be squidged up and go in the freezer with the remaining dough – it will be as good as new once it has rested in the freezer.

VERY IMPORTANT: Refrigerate the pastry case while you make the topping, or for a bit longer if you can (I often do the pastry bit the day before).

Heat about a tablespoon of olive oil and a knob of butter in a large saute pan, then add the leeks and onions. Add a pinch of salt, stir, reduce the heat to low and cover with a lid. Cook until the onions and leeks are very soft, stirring occasionally – you don’t want them to get too brown, just soft and golden.

Pre-heat the oven to 190C and place a baking sheet or shallow roasting tray on the middle shelf to heat up.

Wash and shred the spinach* – the easiest way to do this is to squeeze the spinach in your hands, then kind of roll it into a cigar and shred with a sharp knife. Add to the onions and leeks, along with the garlic, nutmeg and a good grinding of pepper. Do not replace the lid – you want all the liquid in the spinach to evaporate. 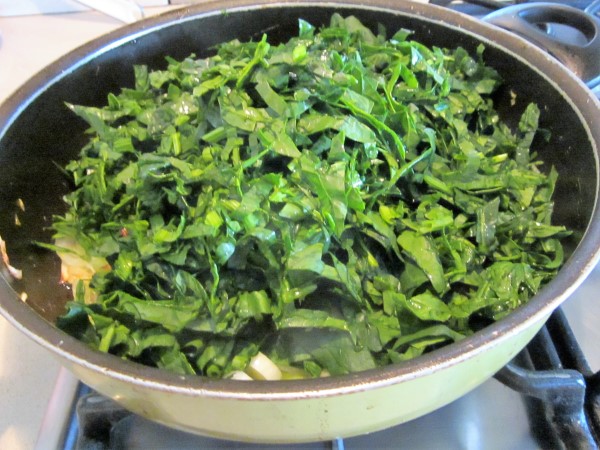 Cook over a medium heat for a few minutes, stirring from time to time, until the spinach has wilted and all the liquid has disappeared.

Meanwhile, whisk the eggs, milk and cream in a large bowl, season with black pepper – you need to be careful with the salt, as the goat’s cheese has it in spades. Tip in the spinach mixture and give it all a gentle stir, then pour into the prepared pastry case – you may need to spread the mixture out gently with a spatula, so that all your spinach doesn’t end up in the middle. 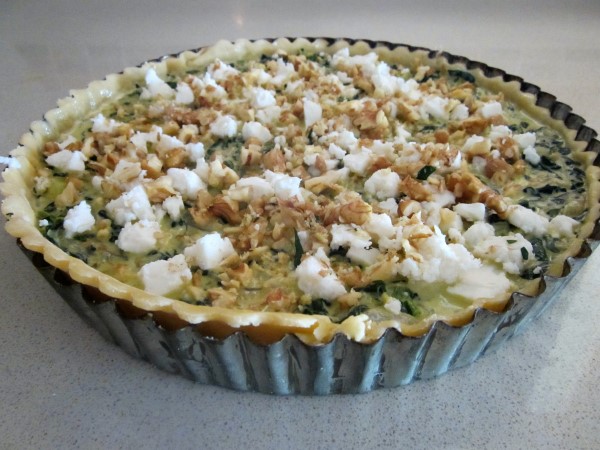 Place on top of the pre-heated baking sheet or roasting tin and bake for about 30 minutes until the topping is a deep golden brown and the centre of the tart is just set. Allow to cool for at least 30 minutes before serving with a green salad or some spring vegetables.

*You could also use a pack of frozen spinach – thaw and make sure the spinach is very well drained – the easiest way is to put into a sieve or colander and press either with your hands or with a saucer.