We rarely eat bread from our local bakeries – I am sure Turkish bread is a novelty if you are a tourist, but it’s basically quite a lot of very sharp crust filled with quite a lot of air. Oh, and the only bits in the middle that aren’t actually air are horrible chemicals which act as yeast accelerators so that the bakers only have to give the dough one rise (very poor behaviour).

Because bread here is subsidised by the government, and the proportion of the population with diabetes, obesity and heart disease has rocketed, it’s now a legal requirement for all bakeries in Turkey to sell at least one type of ‘brown’ bread. Unfortunately, this mostly seems to be either more white pap made to look a bit brown by the addition of half a tablespoon of bran, or rye bread that is so tough, you risk a dentist’s bill every time you eat some.

For these reasons, we mainly make our own bread – that way, we know there’s nothing horrid in it, and we can have something different every week.

However, I do have to own up to a very guilty pleasure. It is something in which I indulge every time we visit the UK: Tesco’s baked-on-the-premises corn bread. It really is so delicious – I am sure it is incredibly bad for us, as it’s basically white flour and cornmeal, but I’m willing to risk my innards on an occasional basis for something so scrummy.

I noticed today that the bread stocks in the freezer are running low, so I decided I’d have a go at replicating the Tesco bread just for a change from our usual whole grain loaf. It can’t be an exact replica, because theirs contains polenta and corn grits, neither of which we can get here in Turkey, so I’ve just had to use plain corn meal. For the avoidance of doubt, it is the yellow meal we are using, not the white squeaky stuff used for thickening. (Turkish bakers, you want  mısır unu, NOT mısır nişastası).

Corn has no gluten, so it does rather sit on the yeast, and you need to be patient with the rising process. The dough will rise, as it is two thirds wheat flour, but it will take longer than usual. Having everything warm before you start will help things along – unfortunately that doesn’t happen in this house, where we have to keep the flour in the fridge to keep the pesky food moths from showing up. Pah.

Putting the tray of water in the bottom of the oven really does help to give the bread a lovely crunchy crust (and the oven gets a steam, so you can give the door an easy clean when you take the bread out – love anything that makes me feel I’ve done a useful job with no real energy spent).

Put the dry ingredients into a large bowl and give them a really good stir – you want to make sure the yeast, salt and sugar are evenly distributed throughout the mix.

Make a well in the centre and pour in the water, milk and oil.

Using a table knife, mix the dough until it starts to clump together.

Tip the dough onto the work top, making sure you scrape all the bits from the side of the bowl.

Knead the dough for about five minutes until it is smooth and starts to feel elastic. If you prod it with your thumb, it should slowly spring back.

Put a few spots of oil in the bottom of the bowl and turn the dough around in it, so all sides have a very light coating of oil (this stops the dough sticking to the bowl as it rises).

Cover the bowl loosely with cling film or with a tea towel and leave to rise in a warm place for about 1.5 hours. 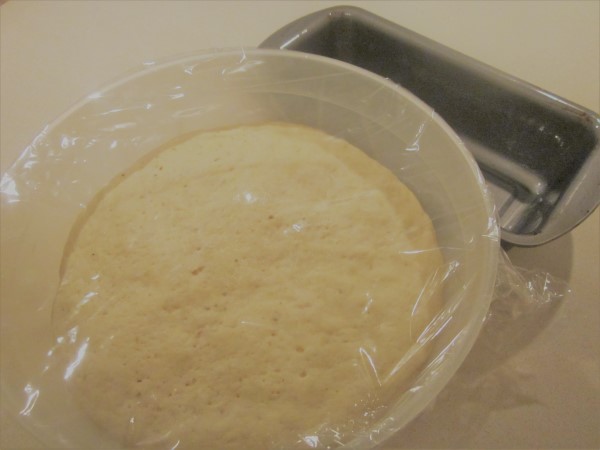 Once the dough has at least doubled in size, tip it out on to the work top and, using your hands, flatten it down roughly into a square, approximately the same length as your loaf tin.

Roll up the dough as if you were making a swiss roll.

Then put the dough into the prepared tin, squashing it down so that it is flat and goes right into the corners. (Rolling your dough like this helps it to rise evenly, hopefully without any large air holes in the finished bread).

Cover again with oiled cling film and leave to rise for about 30 – 40 minutes, until the dough has just started to rise out of the top of the tin. When you have about 15 minutes to go pre-heat the oven to 230C and put an empty roasting tin on the bottom shelf to heat up.

Remove the cling film from the loaf and scatter with a little extra cornmeal if you like. 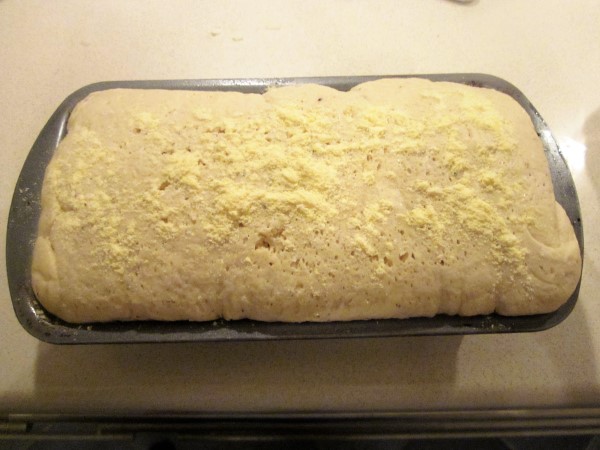 Put the onto a shelf in the centre of the oven and pour a jug of cold water into the roasting tray that you have heated up on the lower shelf – it should immediately create a lot of steam.

Close the oven door gently and immediately turn down the temperature to 200C. Bake for 25 minutes, then remove the loaf from its tin and bake again, directly on the shelf for another 10 minutes – this will ensure the loaf is cooked in the middle and has a nice crisp crust all around.