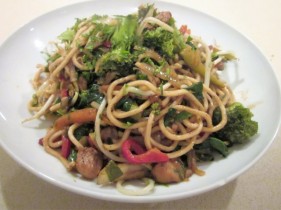 Autumn is on its way; I can sense it. That dazzling light that we get in the Mediterranean during the summer has gone, replaced by much gentler sunshine and cooler breezes. Despite the fact that it’s still 30 degrees in the middle of the day, and we are enjoying going to the beach now that the last of the tourists have departed for the year, our neighbours are getting out their winter woollies and refusing to leave the house without several layers and a flat cap.

This week we’ve been looking after Linda’s dog, Izzy the Sausage, while Linda is on a jaunt to Cappadocia, so that has encouraged us to go out on a few walks, which we’d previously been putting off because of the heat (not to mention terminal bone-idleness on our part). We drove up to a higher village this morning in the hope of finding somewhere cooler to walk, and I noticed that the courgette fields have been replanted with winter squash. The first fruits have reached tennis ball size, so they will hopefully be starting to appear in the market by the time we get back from a short trip to England in a few weeks time.

We are still making an attempt to eat fairly lightly after the excesses of our recent trip, so last night’s dinner was a stir fry involving a lot of vegetables, with just a tiny bit of chicken to help flavour the sauce, along with a small quantity of noodles – well, a girl’s got to have some carbs to hold body and soul together, after all.

You can use whatever vegetables you can get hold of. If I were in the UK, I most certainly wouldn’t turn my nose up at one of those bags of ready-sliced stir-fry veggies – I know they work out to be a little more expensive than slicing your own, but if you are in a hurry, it’s still a great short cut to a healthy dinner. I tend to supplement them with an extra bag of beansprouts and something super-crunchy like sugar snaps or mange touts. Unfortunately, we only get those for a few weeks in the spring here, so I had to improvise with other things.

Once you have sliced all your veggies (or opened up your bag of ready-sliced ones), this only takes a few minutes to cook from start to finish. You do need all your veg chopped and ready to go before you start, but you can do that earlier in the day if you want to, or even the day before, then just cover them and keep them in the fridge.

I have used chicken thigh here, but I’ve also tried making this dish with thinly-sliced beef and pork, and both are delicious. You could also make it with prawns, in which case, add them at the same time as you add the green veggies, so that they are not overcooked. Of course you can make it just with veggies, or you could beat some eggs and throw those in before you add the sauce – so that you end up with a kind of scramble like you get in Pad Thai.

This is great finished with a sprinkling of chopped roasted peanuts (salted ones are fine), but I made all mine into peanut butter and forgot to buy any more. They do really finish off the dish perfectly, so give it a try if you are more efficient with your shopping list than I am.

Egg noodles – I used one nest, weighing 50g dry weight
1 – 2 chicken thighs (I used one and it was plenty), cut into small dice
3cm piece of ginger, peeled and cut into matchsticks (or grate if you prefer)
1 medium carrot, washed and cut into matchsticks
1 teaspoon Chinese 5 spice
3 cloves of garlic, chopped or grated
1 red chilli, sliced (or half a teaspoon of chilli flakes)
1 bunch of spring onions (I only had a few, so added some normal onion, sliced)
Zest of 1 lime, grated
1 bunch of chard, washed (or use a Chinese cabbage, if available)
1 courgette, cut into sticks
1 red pepper, seeded and cut into sticks or slices
Broccoli, cut into small florets – as many as you want
A handful of sugar snaps or mange touts
A couple of big handfuls of beansprouts (Kas folk – they have them in Migros usually)
1 tablespoon roughly chopped roasted peanuts for garnishing (optional)
1 small bunch of coriander (or 1 tablespoon chopped mint if you can’t get coriander)

Put the noodles in a jug or bowl and cover generously with boiling water from the kettle. Leave to soak while you cook the rest of the dish. Make sure your vegetables are all washed and chopped.

Heat a couple of tablespoons of sunflower oil in a wok or large frying pan over a medium heat. Add the chicken, carrot matchsticks, chilli and ginger, and cook for a few minutes until the chicken has browned a little, and the ginger has softened.

Add the Chinese 5 spice and stir until the chicken is well coated. Then add the garlic, red pepper, spring onions and the finely chopped stalks from the coriander (keep the leaves for later) and continue to cook for another minute or so. 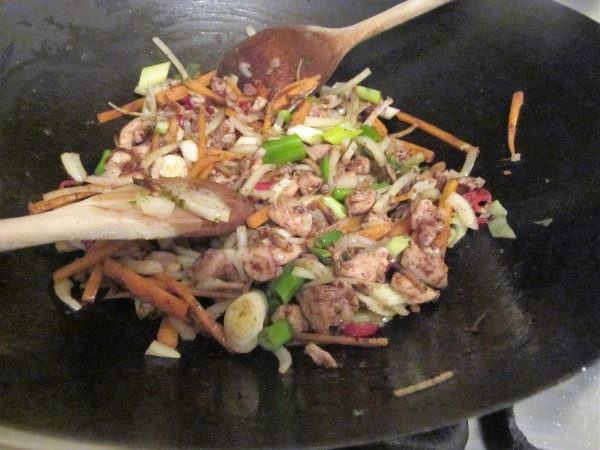 Trim the ends of the chard stalks and then cut straight across at roughly the point where the stalks meet the leafy bits. Cut the stalks across into sticks, then add to the pan with the courgettes, sugar snaps and broccoli. (Shred the leaves from the chard – you will add those at the end – if you are using Chinese cabbage, add that now).

Add the soy sauce, vinegar and lime juice and allow everything to cook for a minute or two, then remove from the heat.

Finally, drain the noodles and add to the pan, along with the, shredded chard leaves, beansprouts and most of the chopped coriander leaves (or mint). Stir through until just combined, then serve in large bowls, sprinkled with the rest of the coriander leaves, and the chopped peanuts, if using. 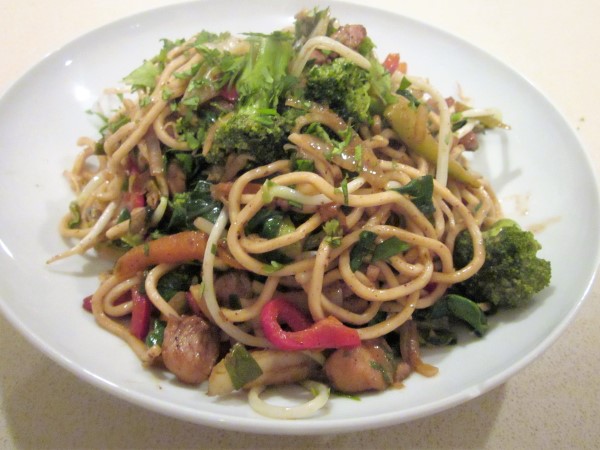