You can tell by the little flurry of blog posts that today has been rainy, windy and largely unpleasant. The rain has now stopped and we have a bit of weak sunshine, so Robin’s been dispatched to get more wood before it starts again (I can’t get the wood in, I’m far too busy using up oranges that he’s picked for me).

Some friends have just been for coffee, so I made a quick batch of ginger biscuits by way of a treat. As we are trying to follow a vegan diet at the moment, of course these are a vegan version – but the only change I had to make was to swap the butter from my original recipe for vegetable margarine. They turned out surprisingly well – in fact, I am not sure that they are not better than their buttery cousins, which can tend to burn around the edges before the centres are cooked. I may well stick to the margarine version even after the end of January.

When we were kids, we used to visit our Yorkshire cousins most Easters, then we did the reverse for the Whitsun holiday in May – I’ve honestly no idea where we all slept, I think it was basically indoor camping. My mum’s cousin Christine always had Yorkshire fairings ready for our arrival – a perfect cure for my ever-predictable travel sickness during the trip up the M1 from the Midlands. In recent years, I’ve zizzed up the recipe a bit, adding extra ginger, both in powder form and some chunks of crystallised ginger – when we were kids, crystallised ginger was something you only had at Christmas, and we used to eat it like sweets, not bake with it. You can use ready chopped glace ginger instead if you prefer – it is much the same thing.

These biscuits only take a few minutes to make and are very easy – and they taste so much better than anything you can buy in the shops. You could easily turn this into a Christmas recipe by replacing the ground ginger with mixed spice or cinnamon and using orange and lemon peel instead of the crystallised ginger.

I forgot to press the first batch of dough balls with a fork before they went into the oven, so they didn’t spread as much as usual – you can see the difference between the two batches in the photo at the end. However, they both tasted just as delicious, but the first batch were slightly chewier (in rather a good way) than the second lot.

You will need a baking tray (cookie sheet), lined with non-stick baking paper

Put the flour, baking powder, ginger, sugar and margarine in a food processor and whizz until the mix looks like fine breadcrumbs. 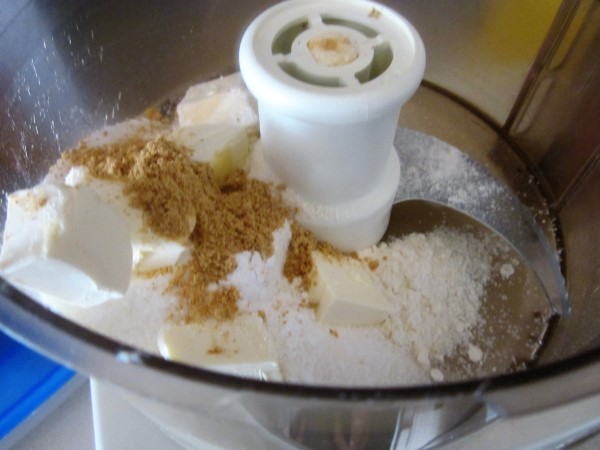 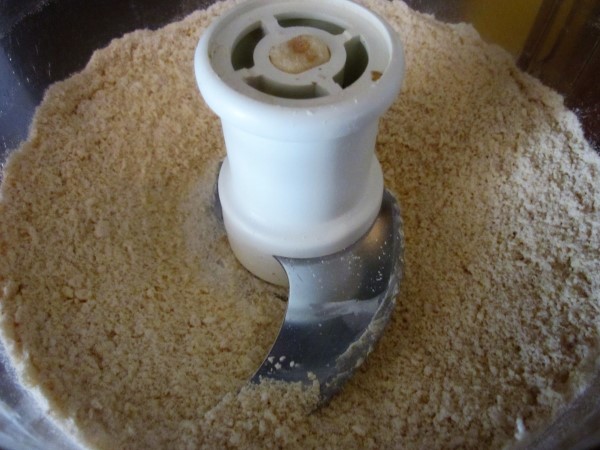 Tip into a bowl and add the chopped crystallised ginger and the golden syrup. 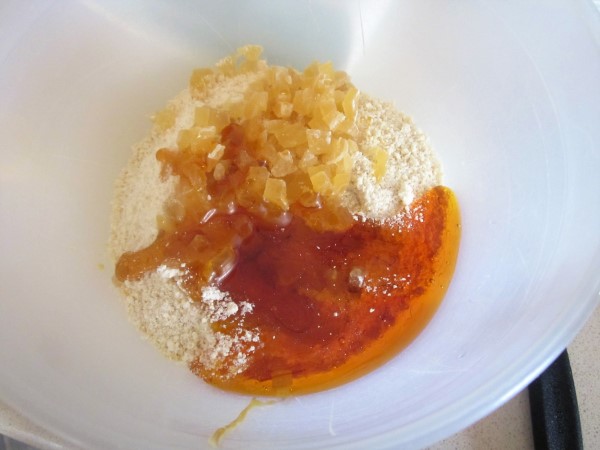 Stir with a table knife until the dough starts to come together, then use your hands to squidge it together into a ball.

Take small pieces of the dough (approx 20g, which is like a walnut in its shell) and roll them into balls with your hands.

Place onto the lined baking tray, making sure they have space to spread (you will need to bake them in two batches or you can use two trays).

If you like, flatten them a little before baking, using the tines of a fork (this makes them spread a little more and makes them more crisp – if you like, try making half like this and leaving the others round, and see which texture you like best).

Bake for about 8 minutes or until they are a deep golden brown – they will have cracks like a ginger nut. Leave on the tray for a few minutes to harden a little, then transfer to a cooling rack.

Repeat with the rest of the dough.