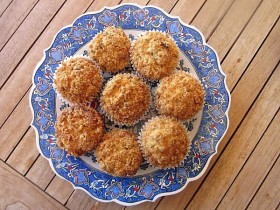 We’ve been back in the UK for over a week, and I made these muffins when we were still in Turkey. Just goes to show how time flies when you are enjoying yourself (or when you are in the middle of a house move and renovation).

We crossed Europe with what felt like approximately half of the contents of our Turkish house stashed into several very large suitcases plus one somewhat recalcitrant picture frame that wouldn’t fit into any suitcase ever manufactured by man.

All went well until the Flybe woman at check-in for the last leg of the journey, between Gatwick and Newquay, said that the picture frame had to go inside the suitcase (the frame was roughly the size of Birmingham). ‘Go on then,’ I said. ‘Show me how that is done – I’d be really interested to know for next time’. She conceded (muttering under her breath) that it could, in fact, have its own personal crate in the hold after all, ‘but you’ll have to go to oversize baggage,’ she added darkly. I am still unsure whether that comment was addressed to me or to the picture frame.

Anyway, we are now safely back in Cornwall and I have a kitchen. I still don’t really know where anything is in said kitchen, and it will have to be completely rearranged at least 14 more times yet, as I don’t really like where I’ve put everything, but we are getting there. It is a lot smaller than my kitchen in Turkey, so I shall have to think very carefully about any further cooking equipment purchases or there will be no room for me.

Yesterday we found the conservatory. It has, I believe, always been attached to roughly the same spot at the back of the first floor, but it was so stuffed to the gills with sofas, beds, boxes and giant Ikea bags full of duvets (why do we own so many duvets when there are only two of us?) that we started to doubt it still existed. Yesterday, we finally finished emptying it AND mopped the floor. It even has a Christmas tree standing in it, but as yet with no lights – they are still in a suitcase somewhere. You can’t have everything in this world.

Back to the muffins. I made these to take to the beach during our last week in Turkey – it seems an absolute lifetime ago. They are extremely yummy – rhubarb crumble and muffin all rolled into one. Be generous with the lovely crunchy topping – it may look a lot, but it kind of sinks a little while it is cooking and you end up with just the right amount. I made this to my usual muffin recipe, which uses vegetable oil, but I think these would be extra delicious and even more decadent if you used melted butter. Just saying…

You will need a 12-hole muffin pan, lined with muffin papers

For the crumble topping:

Put all the ingredients into a small food processor and whizz until combined – the mixture should resemble coarse breadcrumbs. If you want to make it by hand, just rub the softened butter or margarine into the flour and then stir in the other ingredients.

For the muffins, mix the flour, sugar and ginger powder in a large bowl. Measure the milk, yoghurt, egg and oil in a jug and whisk until smooth.

Make a well in the centre of the dry ingredients and pour in the liquid. Stir until just combined, add the chopped rhubarb and ginger, then mix again. Do not overmix or your muffins will be tough – it doesn’t matter if the mix looks a bit lumpy.

Use a spring-action ice cream scoop to measure the batter into the lined muffin tins, then divide the crumble topping between the muffins – there will be about 2 teaspoons of the crumble for each of the muffins.

Bake for around 25 minutes, but check after 20 to make sure they are not burning. If they are browning more on one side than the other, turn the tin around for the last five minutes.

Allow to cool, then serve as they are, or with a dollop of Cornish clotted cream. Ooops.