‘Greetings from snowy Cornwall’ is not a phrase that is uttered very often – we don’t get a great deal of snow around these parts, what with our southerly latitude and the Gulf Stream being just slightly to the west of our garden. Unfortunately the warming influences of the North Atlantic Drift are being ever so slightly outdone by Storm Emma at the moment, and we are stranded at the top of a lethal sheet-ice hill, surrounded by several inches of snow.

Last week, we were cheerfully going about our daily walks without coats or gloves, admiring the primroses and camelias, and smugly congratulating ourselves on living in the part of the country where Spring arrives in February. No doubt the current Siberian conditions being experienced by pretty much all of Britain are our due punishment – sorry everyone. 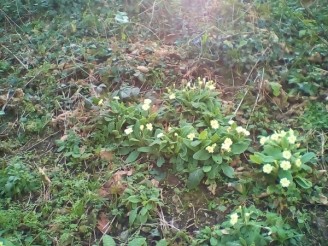 We went out yesterday just as the snow was starting, to top up on firewood and food supplies – by the time we arrived home an hour later, Robin had to clear the snow to make a passage for Spike, our trusty vehicle, to get back up the hill. Apparently he is a fair weather car, so we won’t be going out again until the rain arrives to wash away the snow (which the nice folk at the BBC tell me should be some time over the weekend). None of our neighbours could get up the hill either – it gets steeper once you get past our house – so the lane outside our house now looks like a car park with all the abandoned cars.

So, we’re confined to barracks in front of the fire and a suitably warming winter soup is on the menu for lunch (can’t see much wrong with any of that, actually). I had the ‘seed end’ of a butternut squash to use up plus one rather sad-looking sweet potato and the green end of a leek, the white part of which went into last night’s dinner. I saw a recipe for roasted vegetable soup somewhere last week, which I wanted to try, but now cannot find it, so I’m making this up as I go along. I’ve added garlic, rosemary, tomatoes, chilli and olive oil to the mix – what could possibly go wrong? Actually, I added a very large chilli, complete with seeds, and it really was a bit too lively, even for me. I recommend removing the seeds and the membranes that carry the heat, or just add a pinch of chilli flakes or paprika instead.

You can use any type of stock for this soup – if you want to keep it vegan, obviously stick with vegetable, but chicken would be fine if that is what you have. This was a spur of the moment plan, and all my homemade stock is languishing in the freezer in frozen lumps, so I’m just using a Kallo cube.

You need a tray that is large enough to take all the vegetables in a single layer – you want them to roast, not steam. Today was the day that I discovered I don’t own such a thing in this house (I have dozens of them in Turkey – one will have to be relocated to Cornwall in due course), so I had to use my swiss roll tin. I strongly recommend you line your tin with baking paper or greased foil, to save yourself a horrid washing up job (and in my case to prevent all future biscuits and swiss rolls tasting of garlic).

Serve in front of the fire with cheese toasties or crusty bread on the side.

You will need a baking tray large enough to take the vegetables in a single layer, lined with greased foil or baking paper

1 medium to large sweet potato (no need to peel)
A 12cm (approx) chunk of butternut squash (I used the bulbous end) or other pumpkin or winter squash
1 large red onion
6 cloves garlic, peeled but left whole
1 small red chilli, seeds and membranes removed, or a pinch of chilli flakes or paprika (optional)
4 tomatoes
2 sprigs each of rosemary and thyme, chopped (or you can use dried)
A piece of leek (optional)
1 litre stock (you may not need it all), a cube is fine

Remove the peel from the squash or pumpkin, using a sharp knife, then cut into large chunks. Peel the onion, halve and cut into thick slices. Cut the sweet potato (no need to peel) into similar sized chunks, and quarter the tomatoes. If you are using leek, slice thickly.

Arrange the vegetables in a single layer on the prepared baking tray, scatter over the herbs and tuck in the chilli and peeled garlic cloves. Drizzle over the olive oil and season very generously with salt and pepper.

Roast in the pre-heated oven for around 50 minutes until the vegetables have caramelised and are starting to char around the edges.

Tip the vegetables into a large saucepan and pour in enough stock to cover them – reserve any surplus stock in case you want to thin the soup later. If there are any nice caramelised bits on the baking paper or foil, loosen these with a couple of tablespoons of hot water or stock and scrape into the pan with the vegetables.

Bring the vegetable and stock mixture to the boil, turn down the heat and then simmer for 15 minutes.

Purée with a stick blender or in a jug blender. If the soup is too thick, add a little more stock – I used the whole litre. Bring the soup back to a simmer, then serve immediately in warm bowls.