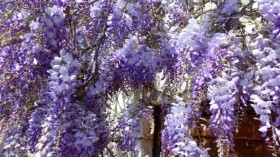 I feel that spring is springing. The wisteria on our south-facing fence is out in full bloom, the bougainvillea is in bud and we had a pair of Cretzschmar’s buntings passing through the garden yesterday. I’ve never seen them before – they were so pretty in their rather eye-catching salmon pink and pale blue liveries – I had to pore for ages over the photos in our Mediterranean bird book to identify them. Any day we should be receiving visits from hoopoes and bee eaters, then we’ll know that summer is truly on its way. We had our first giant wasp in the kitchen this morning – no doubt house hunting, so I hope he eventually decided on a different neighbourhood.

As soon as the sun goes down, the temperature plummets to single figures and we’re still lighting the wood stove every evening. In fact, it still feels way too cold to be even thinking about summery food, so today I decided to make some hearty rib-sticking soup to warm us up.

One thing you can say for the Turks – they certainly  know their way around a lentil. Green, brown, yellow and red versions appear in soups, salads and stews – even as lentil mousse in one of our local restaurants. I recently came across some of the little black Puy lentils that we used to buy in France. Here they call them beluga lentils, which I thought was a rather appropriate name – they do look a little like glossy black caviar. I’ve not seen them here before, so I couldn’t resist buying a bag, but then immediately forgot about them once they’d been consigned to the lentil cupboard (it does have other things in it – about 18 different varieties of rice, mung beans, barley, noodles and pasta, amongst others – if ever we are snowed in, we will have enough dried goods to last us a month).

I happened to have a couple of rashers of smoked bacon in the fridge, for which I had no other plan, so I added those too. If you want to keep this soup meat-free, just omit the bacon – the paprika gives you all the smoky flavour you need.

If you have fresh stock, so much the better, but there are so many other flavours going on in this soup that a good quality cube or powder would be absolutely fine. The Puy lentils take a surprisingly long time to cook, so be prepared to leave this bubbling away for up to an hour (longer won’t hurt).If you don’t have Puy lentils, the brown or green kind would be absolutely fine, but cook them for less time so that they don’t disintegrate (though it would not be a disaster if they did – you could skip the blending stage in that case).

Serve with plenty of crusty bread for dunking.

Heat a couple of tablespoons of olive oil in a large saucepan and add the onions. Cook over a low to medium heat until starting to soften. Add the bacon (if using), carrots, celery, leek and garlic, cover and cook over a very low heat for five to ten minutes until all the vegetables have softened.

Stir in the lentils and paprika, then add the passata (or tinned tomatoes), stock and herbs. Season with salt and pepper (you may not need salt if your bacon is salty). Bring to the boil, turn down the heat to low, cover and cook for around 40 minutes or until the lentils are tender.

Remove some of the soup from the pan (I filled a 500ml jug), then puree the rest with a stick blender or in a jug blender.

Return the retained (unblended) soup to the pan and then add the can of drained beans. Heat until just simmering, then stir in the chopped parsley and serve the soup in warm bowls with some crusty bread. 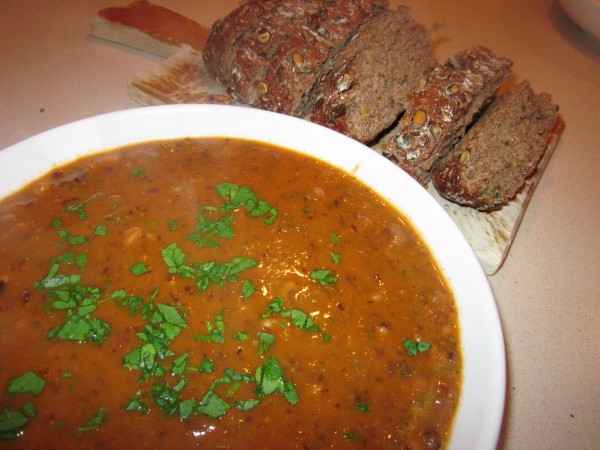