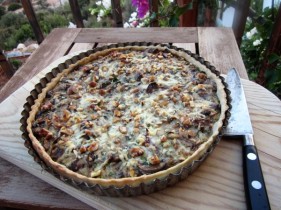 We’ve finally had our first rainfall after a long dry summer, so the trees have had a lovely wash and are bright green again for the first time since June.

Turkish students are back at school, their parents are back in their offices, and the beaches of Kaş are once again a safe place to while away a sunny afternoon.

Unfortunately, we have been hearing the most awful horror stories of the ‘goings on’ here while we were tucked away in the safety of Cornwall.

Kaş has a population of just under 8,000 – no-one actually knows what it swells to in the summer months, but I would guess that at least five times that number of people are trying to squeeze themselves into our little town, and very often it bursts at the seams. Every year we think it cannot get worse, but every year it does.

This year, with hotels, pensions, private homes and school dormitories full, car loads of people from Turkey’s major cities began setting up illegal camp sites at the side of the road – anywhere capable of housing a few bodies. I won’t go into details about how they set about their ablutions or did their laundry, but shall we just say that an awful lot of stuff that shouldn’t end up in the sea did exactly that. Turkey has the most amazing natural resources and a hugely diverse range of wildlife, both on land and in the sea, yet the authorities here seem to have no inclination to do anything to protect them.

The coast in this area is one of the last breeding grounds for the endangered loggerhead turtle, and is also home to the bottlenose dolphin, as well as being a major habitat for rare wild orchids and sea daffodils. This season all of them, along with many other species, will have suffered the effects of shampoo, shower gel, laundry detergent (and much worse) polluting the land and then inevitably the water. Very sadly, we can see that the very things that attract people to Kaş in the first place will simply cease to exist. Presumably, once there is nothing left to destroy, these rude and ignorant ‘tourists’ will simply move on and wreck the next pristine place. I am sure it was ever thus, but it makes me supremely angry that no lessons ever seem to be learned.

Enough ranting for today. Perhaps I should stick to cooking in the interests of my blood pressure.

Having eaten meat twice this week already – most unusual for us, as we often don’t eat it from one month to the next – I decided a meat-free meal was in order for Sunday’s supper with our lovely friend and neighbour Linda. I also happily remembered that I had a pastry case in the freezer, already rolled out and in the tin. I love it when things like that happen – it makes me feel very smug indeed that I am on my way to supper with one job already down.

I visited the cheese man in the Friday market and secured myself a great lump of Bergama, which is a bit like a cross between Cheddar and Parmesan – softer than Parmesan, but saltier than Cheddar. Parmesan or Pecorino would be perfect for this recipe, though you could certainly use a strong Cheddar if that is what you have to hand.

If you can get a mix of mushrooms or at least some of the chestnut variety, that is even better, though I could only find the ordinary white variety. It does look like an awful lot of mushrooms, but they cook down to exactly the right quantity. This is really delicious made with fresh tarragon, but dried is absolutely fine if you can’t get it. Do make sure it is a fresh pack though, as it loses its flavour pretty much straight away once it is opened.

You will need shortcrust pastry to line an approx 23cm tart tin (ready-made is fine, or here’s a good recipe)

Roll out your pastry very thinly (even if it is ready-rolled, you will need to roll it much more thinly or it won’t cook in the time – you can use any trimmings to make jam tarts or mince pies, or you can freeze it for another day). Make sure your tin is well greased and use the pastry to line the tin, then chill for at least half an hour before making the filling (overnight is fine if you want to get ahead). Be very careful not to puncture the pastry case or your filling will escape – use a little ball of pastry to press the pastry into the corners.

Heat the olive oil and half of the butter in a large saute pan and add the onions, together with a large pinch of sugar and season generously. (The sugar helps the onion to caramelise and the salt helps to draw out the moisture from the onions, which prevents them from burning).

Once the onions are very soft and have reduced down, remove them from the pan into a large bowl and set aside. Add the rest of the butter to the pan, then add the mushrooms, seasoning again – the mushrooms will probably nearly fill your pan, but just stick with the programme, they will cook down a great deal. If you are using dried tarragon, add it now. 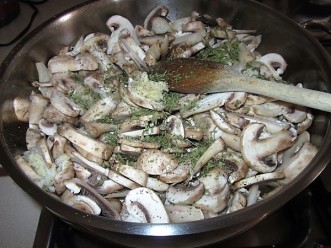 Cook the mushrooms over a medium heat, stirring from time to time, until they have cooked right down and all of the moisture has evaporated. Add the mushrooms to the bowl with the onions.

Measure the cream and eggs in a jug and whisk until smooth and well combined. Stir in to the mushroom and onion mix, along with half of the cheese, the parsley and fresh tarragon (if using), and a little black pepper (don’t add more salt, as the cheese has it in spades).

Mix until well combined, then pour into the tart case.

Stand the tart on a piece of foil on top of the pre-heated baking sheet, then bake for around 30 minutes, until the filling has just set and both the pastry and the walnuts are golden brown. (If your tart does have any leakage, the foil will catch it and you won’t have a horrid cleaning up job to do). 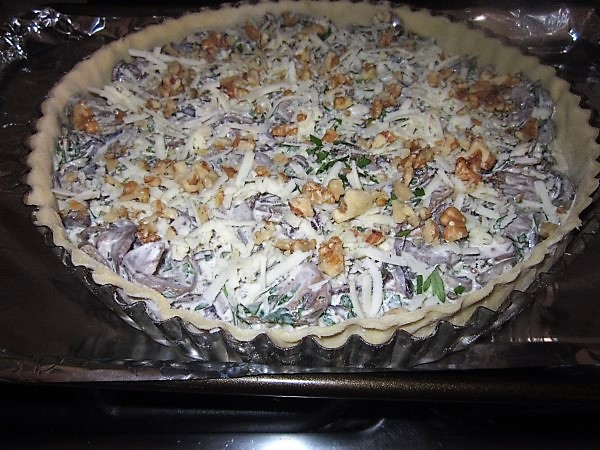 Allow to cool and set for at least 15 minutes before slicing – it is best served just warm or at room temperature. 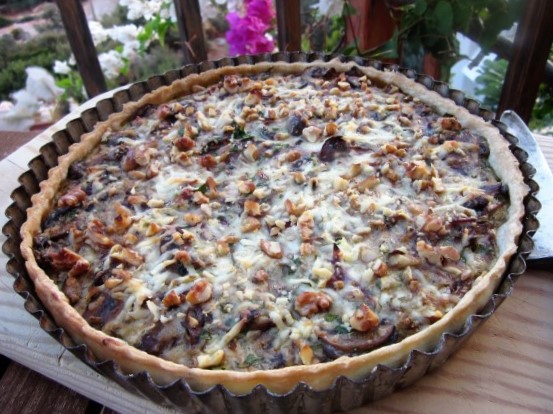 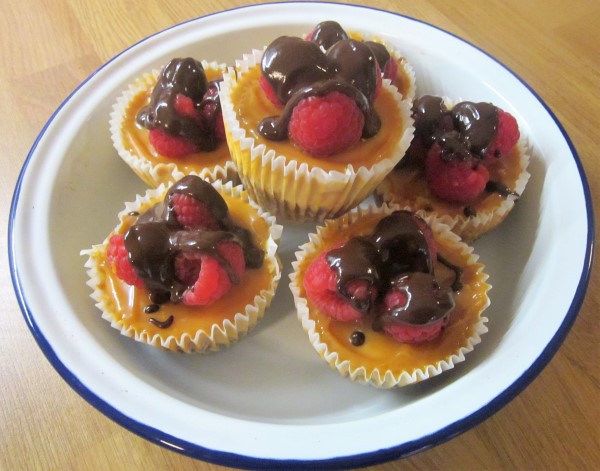