We are back home in Turkey and I have an entire kitchen at my disposal: working oven, tick; working hob, tick; fridge on the same floor – indeed in the same room – as the rest of the cooking facilities, tick. Food in the fridge? Errrrr, scratch that.

It has been unseasonably hot since we got back and I’ve failed yet to make a raid on the greengrocer – shopping has been limited to a quick skirmish in the supermarket on our way through town at the beginning of the week, with meals mainly scratched together from the various things our house guests left in the fridge.

Luckily, we have a little fruit and veg market in our village square every Thursday, so we’ve just had a walk up there and pretty much availed ourselves of everything on the stall. With temperatures still in the 30s, making jam wasn’t entirely on my agenda for this week, but there were beautiful damsons and figs, which I couldn’t resist and which now need my immediate attention. They will be transformed into fig & plum (or make that damson in this case) preserves, which will bring back a little bit of summer to spread on our soda bread toast in front of the fire this winter. I noticed that I made this jam slightly earlier in September last year, just before we embarked on our mammoth trip to Tonga and New Zealand – clearly I am a glutton for punishment (or possibly just a glutton).

The cats seem pleased to see us, after an initial spot of ‘cold shoulder, who exactly are you then?’ treatment when we first arrived home. Now that they’ve remembered that lying on the bed underneath the fan is so scrummy and that Jayne is the nice person who doles out morsels of chicken and has the rights to the tin opener that gives them access to the Felix, they seem to have got over their small fit of pique. They always look so small to us when we get back after the summer – just like humans, they tend to eat a lot less during the very hot months and they lose their incredibly luxuriant thick winter coats, so we’re always surprised to see how skinny they are.

Talking of eating less… Who knew that incessant guzzling of Cornish pasties, Tesco cornbread, Ian’s oaty soda bread, fish and chips at our local outpost of Rick Stein and the Sunday roast at the Norway Inn could have such a direct impact on the ability to squeeze into one’s summer wardrobe? We’ve been in jeans for weeks back in Blighty – I can only assume that they must, inexplicably, expand at the same rate as one’s figure, but I can report that my shorts are clearly not blessed with this talent. If we are going to spend more time in the UK and I am not end up the size of a house (make that a five-bedder-with-conservatory-substantial-kind-of-house), then I am going to have to learn to rein myself in. Pah.

Today, we are having a much-needed 5:2 day. We have sort of stuck to our 5:2 regime while we’ve been in the UK, but our rather basic cooking facilities and temporary living-all-in-one-room lifestyle rendered us a bit lazy about it, so we need to get back on track.

Tonight’s offering is ‘creamy’ tomato and roasted red pepper soup, which is low fat, low carb and very tasty – it is one of those soups that somehow ends up being more than the sum of its parts, very fine though they are. It also fits the bill for the ingredients I have to hand – the remains of a jar of roasted peppers that were lurking in the fridge and the pair of enormous sweet-smelling tomatoes I just bought at the village stall – the two of them weigh just over a kilo!

Although the soup has a creamy texture, there is no cream or milk involved – it is achieved by adding a little shortgrain rice along with the stock. It adds very little in terms of calories, but releases its starch, which gives the soup a lovely thick silky texture when it is blended. This soup also has the added bonus of being vegan without any tweaking – handy for anyone out there following a plant-based diet.

As always, homemade stock will give the soup a lovely freshness and depth of flavour, but a good quality cube or powder will do perfectly fine. Equally, if you can’t get hold of decent tomatoes, by all means substitute tinned tomatoes – remember that the whole plum ones always seem to have more flavour than the ready-chopped type, and you can just break them up in the pan with a wooden spoon.

Heat a tablespoon or so of olive oil in a large saucepan and add the onion, celery and carrot. Season with salt and pepper, cover with a lid and cook over a low heat for five minutes or until the vegetables have started to soften a little.

Stir in the garlic and chilli flakes and continue cooking (covered) while you deal with the tomatoes.

Cut the tomatoes into chunks and discard the stalky bits – no need to worry about appearance, as it will all be blitzed in the end. Drain the peppers and roughly chop, then add to the pan along with the tomatoes. 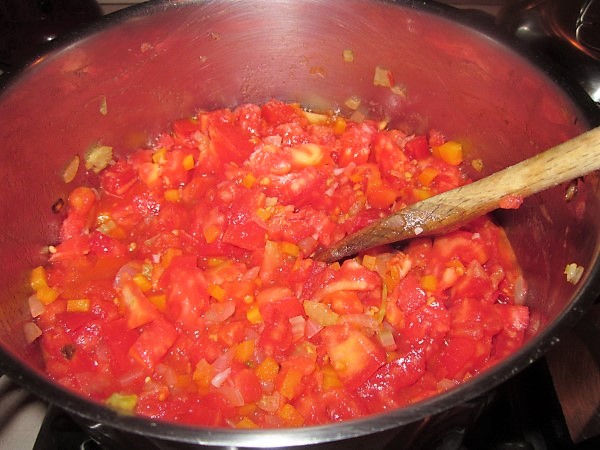 Chop half of the bunch of basil and stir into the soup, along with the stock and the rice. If your peppers were not preserved in vinegar, add a small splash of vinegar. 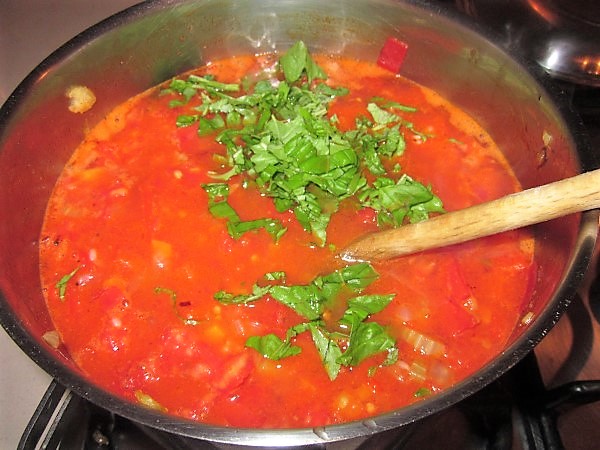 Bring to the boil, then turn down the heat and simmer gently, covered, for about 15 – 20 minutes, until the vegetables are very soft and the tomatoes have pulped down.

Purée with a stick blender or in a jug blender until smooth. Shred the rest of the basil and stir into the soup, saving a little for the top. Serve with chunky bread for maximum dunking opportunities. 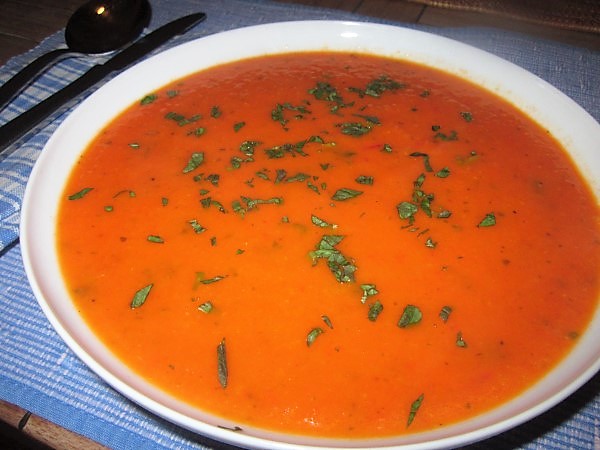